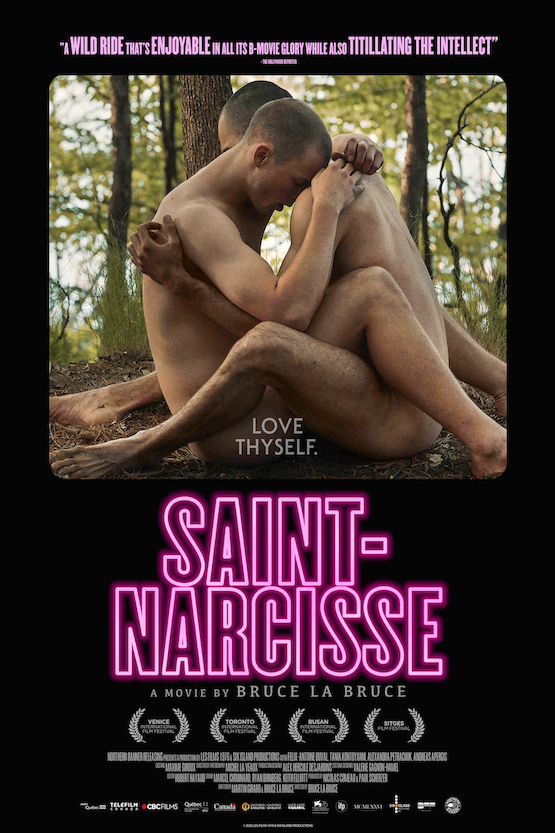 22-year-old Dominic has a fetish … for himself. Nothing fascinates him more than his own reflection and he spends his everyday life taking Polaroid selfies, among other things, which he also hands out to strangers on the street.

When his beloved grandmother, who raised him, dies, Dominic uncovers a long-held family secret: His mother, who was thought dead, is still alive!

Dominic sets out to find his mother, and in doing so learns not only what caused her to abandon him as a child, but also that he still has a twin brother named Daniel, who was raised by a corrupt priest in a remote monastery.

Determined to meet his twin brother, Dominic seeks out the monastery where Daniel lives. But the reunion of the two brothers does not hold only joy, as soon all involved find themselves caught in a tangled web of desire, revenge and redemption.

”If you like La Bruce’s earlier films, you’ll love this one.” queerguru.com.

”All in all, Saint-Narcisse is a wild ride that is entertaining in all its B-movie glory while also stimulating the intellect.” hollywoodreporter.com

”This blend of camp and melodrama is one of the funniest films this year and handles taboo subjects with surprising sensitivity.” seventh-row.com

”An irreverent, compelling and very sensual story with a fantastic Félix-Antoine Duval. The music is wonderful and immerses the viewer in this bizarre fable – an extraordinary adventure, perfectly realized.” cinemagavia.es