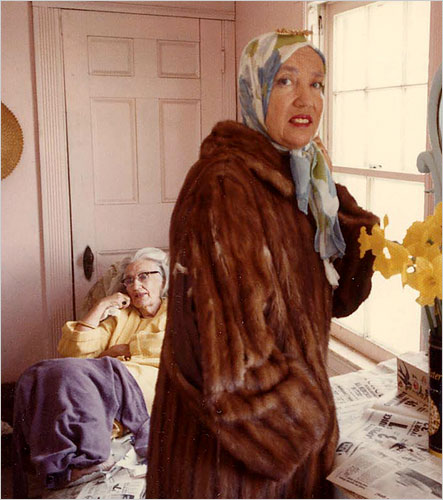 She attended the Spence School, a private school for the wealthy, located in New York until her mother mysteriously took her out – apparently for a respiratory illness. She was kept out of the school for two years (during the age of eleven and twelve), but accompanied her mother to movies and plays nearly every day.

In 1935 she graduated from Miss Porter’s School, a highly-selective finishing school for ladies, located in Farmington, Connecticut. She had her debutante debut (a formal introduction to society) at the Pierre Hotel on Fifth Avenue, New York on New Year’s Day in 1936. She socialized at the Maidstone Club, the first private sports club in East Hampton, Long Island.

A tall, blue-eyed blonde with a superb figure, John Davis, Bouvier family historian, said Edie was one of the reigning beauties of East Hampton society, “surpassing even the dark charm of [her cousin] Jacqueline Bouvier Kennedy.” She was known around town as “Body Beautiful Beale” and had a steady following of beaus.

Though never married, it is believed that she had proposals from Joe Kennedy, Jr. and J. Paul Getty. She even dated jetsetters like Howard Hughes. Her one true love was Julius Krug, former Secretary of Interior. Her mother apparently scared off every suitor Edie ever had for fear that she would one day be left alone with no one to care for her.

From 1947 to 1952 she lived at the Barbizon Hotel for Women, one of the earliest residential housing alternatives for young women moving to New York City to take advantage of professional opportunities. Codes of conduct and dress were enforced, no men were allowed above the lobby floor, and prospective tenants needed three letters of recommendation to be considered residency. Edie hoped to land her “big break” in showbusiness while in the city. Max Gordon, the successful Broadway producer, saw potential in Edie and invited her to audition for the Theatre Guild that summer. To her dismay, she was forced to return to Grey Gardens before that chance came; her mother could no longer afford to send her grocery money and Edie had no legitimate way of supporting herself.

On July 29, 1952, Edie returned to East Hampton to live with her mother at Grey Gardens. As famously portrayed in the Maysles documentary, the pair would have daily routines of quarrels, reminiscences, reconciliations, and (yes!) singing. Edie lived proudly in abject poverty and filth amongst cats and raccoons at the crumbling manor until her mother passed away in 1977.

Edith Bouvier Beale found fame thanks to the Maysles’ documentary. She found fulfilment, however, in the unexpected and utterly unique years that came next.  After 25 years of practising her dance routines and honing her voice under the watchful eye of her mother, Edie would now finally have her chance to shine in front of an audience – at the age of 60. She was offered an eight-show stint (January 10-14, 1978) performing in the Paradise Room of Reno Sweeny, a Greenwich Village cabaret in New York. Patrons paid $7.50 apiece to watch Edie sing, dance, and answer questions from the audience – all while wearing a patch over one eye (she had cataract surgery only two weeks before). She was also reportedly asked to perform at a club in London and to record an album. Those two propositions never materialized, though.

Meet Big and Little Edie Beale–high-society dropouts, mother and daughter, reclusive cousins of Jackie O.–thriving together amid the decay and disorder of their ramshackle East Hampton mansion. An intimate portrait and an eerie echo of the Kennedy Camelot, Albert and David Maysles’s 1976 Grey Gardens quickly became a cult classic and established Little Edie as a fashion icon and philosopher queen.